The first three years of the event, held at Smolenice castle near Bratislava in 1968-1970, attracted Stockhausen, Ligeti, Kagel, Lutosławski and other personalities to Slovakia and thus created an important platform for presentation of domestic musical production and for its confrontation with world trends. 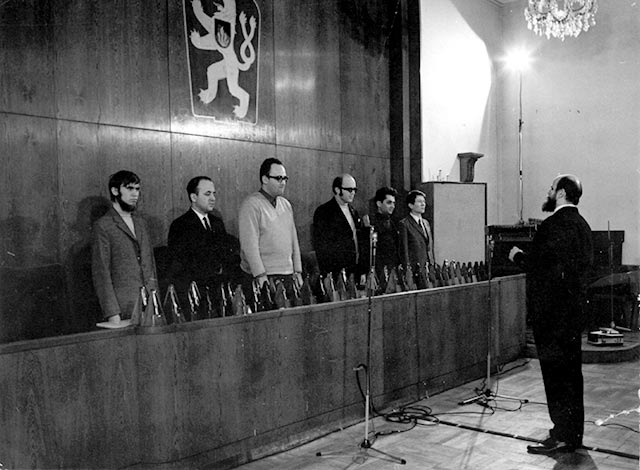 Unfortunately, the partial opening of iron curtain and the general cultural upsurge of the 1960s were frozen by tanks in 1968. Neo-stalinistic “normalization” of the early 1970s violently pushed this – and not only this – creative branch beyond the borders of permitted cultural activities. A number of composers were pushed into background, established international contacts were lost, public interest in experimenting decreased. 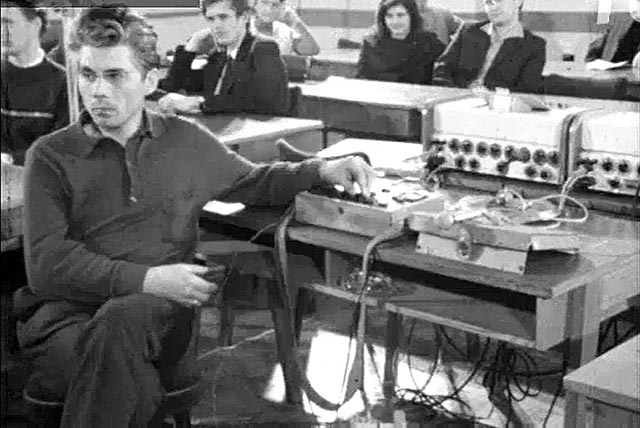 The idea to create and organize Seminars on New Music in the House of Researchers of the Slovak Academy of Sciences (SAV), located in the castle of Smolenice, a small village near Bratislava, was born in the 60-ties of the last century as a very top result of efforts and engagement of avant-garde movements in Slovak music. The project was initiated by Peter Faltin (in cooperation with L. Kupkovič, P. Kolman and I. Parík) who also became the artistic leader of the event. The very first idea to present the Seminars in form of an international exhibition of contemporary music already dates back to 1965. However, the respective preparations were hindered by the exaggerated carefulness and lack of organizational flexibility on the part of the Slovak Composers Association which should have realized the presentation. First when the SAV Department of Musical Science with its employee P. Faltin joined the initiative and the engaged ones also counted on the participation of the Experimental Studio of the Slovak Radio in Bratislava, headed by P. Kolman, could the former intention have been developed into a more generous and specific form. Inspired by the model of summer courses of New Music, held in Darmstadt, Germany, the Seminars in Smolenice represented their creative Slovak counterpart. Besides concerts and thematic lectures, the programme of the seminars also included interpretation focused workshops.

Held on home ground, the event represented something very outstanding and special, in particular by creating an inspiring platform for the meeting of Slovak musicians with renowned personalities of the contemporary music from abroad, as well as a space for presenting compositions by the representatives of the Slovak avant-garde music that enabled mutual exchange of know-how and information within a pleasant atmosphere of natural confrontation. The Seminars in Smolenice took place in years 1968 – 1970.

The Ensemble, a collective composition by West German authors based on the idea of K. Stockhausen, led to the creation of its Slovak counterpart Profiles (Profily), composed as a mosaic of pieces by P. Kolman, L. Kupkovič, J. Malovec and I. Parík. This composition was presented at the first edition of the Seminars in Smolenice in 1968. Kolman contributed to this mosaic with an older piece Molisation: Mobile for Flute and Vibraphone, Kupkovič contributed with Étude (a banal theme from an opera by Jacques Offenbach – The Tales of Hoffmann – representing the basis of the collage), Parík contributed with solo pieces for flute, trumpet and violoncello and Malovec with an electroacoustic composition Orthogenesis. In order to perceive this project it was assumed that the listeners will move around the rooms and premises of the castle in Smolenice (staircase, tower), encouraging a new so-called topophonic regulation of music sound and a non-conventional contact of performing artists with the audience. The presence of K. Stockhausen and the presentation of his piece Anthems (it was the very first presentation outside of Germany with the composer active behind the director’s control panel) combined with a vivid way of lecturing (he analysed his composition Procession (Prozession) were one of the highlights of the Seminars in Smolenice in 1968. The block of lectures given by foreign participants – Ulrich Dibelius gave a speech on the Possibilities and dangers of contemporary music, Hans Peter Reinecke addressed the psychological aspects of music perception, Eduard Herzog presented the numeric patterns of all-interval dodecaphonic series – was enriched by home musicians. P. Faltin discussed the statics and dynamics of processing in music from a philosophical point of view, P. Kolman presented the technique of “area composition” and L. Kupkovič was dealing with the possibilities of widening the composition material that the current composer has at his disposal.

One year later, the event in Smolenice witnessed an appealing apogee again – a visit of composer György Ligeti, who analysed his compositions (Atmosphéres, Requiem, Lux aeterna, Cello Concerto) and contributed to the concert programme of “Music of Today” with an unusual Poème Symphonique For 100 metronomes.

Carl Dahlhaus contributed to the block of theoretical lectures with a lecture themed Aesthetic problems of electronic music, Czech musicologist Vladimír Lébl focused on the typology of sound material in New Music, Hans Peter Reinecke presented the possibilities of research on measurability of New Music semantic structures and Peter Faltin raised the problem of ontological transformations in the art of avant-garde. Ligeti’s presentation on creative problems of authors was followed by the clarinettist Vinko Globokar as well as Slovak composers P. Kolman (Technology of Electronic Music), L. Kupkovič (To the Idea of Dissected Texts) and J. Malovec (My Journey to Electronic Music).

In addition to the “Music of Today” concerts (which also featured Notturno for Five Towers and Twelve Winds by Ivan Parík, which were later rearranged by the author under the title Tower Music), the QuAX Ensemble from Prague appeared on the stage. Their programme also included pieces by representatives of American avant-garde – John Cage (Atlas Eclipticalis, Amores) and Cornelius Cardew (Schooltime Composition, Treatise). In the second edition of the Seminars the inspiring spatial conditions of the Smolenice Castle were used for the realization of Ad libitum, a happening initiated by Kupkovič. The artistic latitude of the project was based on the fact that it did not require specific performers. During four hours of this event the participants of the Seminar had at their disposal various traditional acoustic instruments as well as instruments generating and modulating electroacoustic sound which were situated in the particular premises of the castle. The sound was produced on the basis of performers’ free imagination and inspiration. (The movement of “artists” within this open space project was regulated by traffic signs). This was the last of L. Kupkovič’s provocative ideas – including a group of tape-music projects titled Dissected Texts (1968-1969), based on the collection of excerpts from the compositions by classical authors (W.A. Mozart, J. Brahms, L. van Beethoven). Using pastiche and collage of material the Dissected Text No. 3 ironically comments on the Final of Beethoven’s 9th Symphony, what can be perceived not only as a joke, but also as the composer’s protest against the occupation of Czechoslovakia by the Warsaw Treaty troops in August 1968.

The Smolenice Seminar, held in April 1970, this time without presence of L. Kupkovič and P. Faltin as key personalities who initiated the idea of the event, was an art of „swan song“ of the Slovak musical avant-garde and their activity. Under organizational leadership of I. Parík, the seminar gave to both home participants and foreign guests (theorists Carl Dahlhaus, Dénes Zoltai, Jan Kapr, Mauricio Kagel’s New Music Ensemble from Cologne) an insight into new compositions of the Slovak autonomous electroacoustic production – Hommage to Wiliam Croft by I. Parík, Omaggio á Gesualdo by P. Kolman and Tabu by J. Malovec (a part of this programme was already presented in December 1969 at the first concert of electroacoustic compositions in Bratislava). The programme also included new Slovak choral compositions: Three Madrigal Impressions by I. Hrušovský, Litanie lauretanae by T. Salva and Zeljenka’s Games For 13 Singers performed by the Slovak Madrigalists.
The introduction of Dislocation, a project by the student of musicology and beginning composer-autodidact Milan Adamčiak represented an attempt to revive and follow in the space music projects by Kupkovič (source).